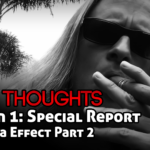 It’s official, the world isn’t what we think it is. Based on a user comment on YouTube, the famous inventor of the cotton gin Mr. Eli Whitney is for some now a white man who graduated from Yale University and not as it was for some of us a black slave who’s irony was that he formerly picked cotton. What does this mean? Is the universe as serious as we think it it is? Is it as terminal as some fear? Your humble narrator no longer believes this is the case. Perhaps many of the unexplained phenomena of the universe are mere cracks in the official closed minded consciousness that is so revered as humanity. Let’s discuss.