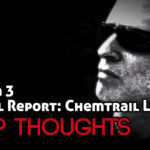 Television host Rachel Reenstra upon visiting her local Urgent Care stumbles into a doctor who reveals that her illness is what he and his associates call “Chemtrail Lung.” Rachel asks permission to film his answer. She goes on to interview him about flu shots to which he replies he doesn’t generally advise it. This interview was published on YouTube and went viral. A mob made of self-loathing shills descended from the forest of social media and began attacking everyone involved. In this episode, we discuss the impeccable integrity of Rachel and the utter lunacy of accusing those revealing a conspiracy as the very ones conducting it. Enjoy.