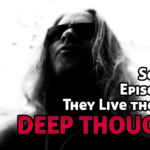 In November of 1988, a movie released called “They Live.” Based on a short story called “Eight O’Clock in the Morning” by Ray Nelson, John Carpenter created a film that he referred to as a documentary. In this episode, we review the setup of the film and the overall impact of how prophetic it is today.